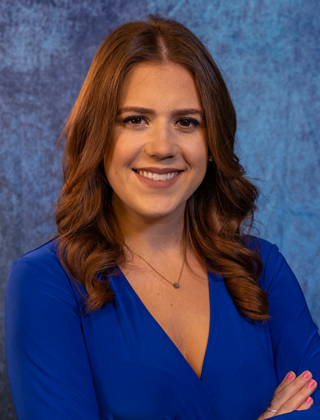 Victoria has a passion for telling the stories of those in her community and informing those around her.

During her time with WGXA, she placed 2nd for 'Best Spot News Video: “Red Cross: 15 Families, 52 People Displaced After Macon Apartment Complex Fire”' for the GA APME Awards. Victoria and the entire WGXA newsroom won first place at the GA APME for 'Best Multiplatform Coverage of a Single Story: “Escaped Inmate in Houston County, Georgia.”' Victoria played a crucial role in the coverage, broadcasting for 9 hours and helping break the news that the escaped inmate was captured.

Victoria is blessed to call Georgia her home. Born and raised in sunny Miami, Florida, she's traded her Florida oranges for some Georgia peaches! She is of Cuban descent, making Spanish her first language. And fun fact, she’s the only redhead in her family!

She graduated from the University of Miami with a degree in Broadcast Journalism and a minor in History. (GO CANES!) During her time in school, Victoria anchored and reported for multiple shows on UMTV, an award-winning college television station on campus. She was also inducted to the National Broadcast Society - Alpha Epsilon Rho. Before joining WGXA, Victoria interned for the FOX affiliate, WSVN, in Miami and The CW for South Florida. Before joining WGXA, Victoria was a production assistant at WTOC in Savannah.

When she's not in the newsroom or chasing breaking news, you can find Victoria drinking coffee, spending time with family or exploring Georgia.

Have a story idea or just want to say hi? Victoria wants to hear from you! Follow her on Facebook and Twitter. You can also email her at vdecardenas@wgxa-tv.com